Because of its unique light-conducting properties, the eye is particularly suited for OCT imaging. OCT has revolutionized the diagnosis and management of common eye diseases such as glaucoma, macular degeneration, and diabetic retinopathy, as well as many other diseases of the retina, optic nerve, and anterior segment of the eye.

It has become a mainstay in the eye clinic, and tens of thousands of OCT devices are currently used in ophthalmology practices around the world.

OCT was developed through a collaborative effort between the New England Eye Center (NEEC) of Tufts University School of Medicine, the Department of Electrical Engineering and Computer Science at MIT, and Lincoln Laboratory at MIT.

The technology was developed by James Fujimoto’s laboratory at MIT in 1991. The first time a patient was imaged with OCT outside of the laboratory took place at NEEC at Tufts Medical Center in 1994. By 1996, the first commercially available device was developed by Carl Zeiss Meditec, Inc.

With the help of ongoing collaborative efforts between NEEC and MIT, new and improved OCT technologies have been developed and implemented, including spectral-domain OCT, ultrahigh-resolution OCT, swept-source OCT, and OCT angiography.

The collaboration between the two departments continues to be robust, and a multitude of research projects in OCT are ongoing at the NEEC. Below is a brief introduction to some of the OCT technologies researched at NEEC:

Traditionally, OCT has had an axial resolution in the tissue between 6 and 10 microns. By using broadband light sources, axial resolutions of 2-3 microns in tissue are possible, termed ultrahigh-resolution OCT.

For many years, NEEC has been one of the only centers in the world with a device capable of imaging the retina using ultrahigh-resolution OCT technology.

This instrument has allowed the detection of microscopic details of the retinal anatomy never before visualized using standard resolution OCT machines. 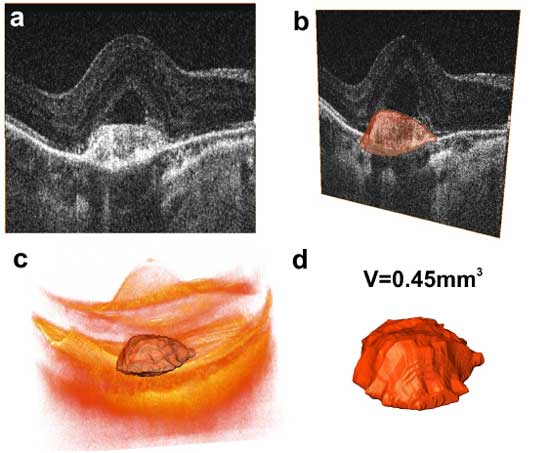 Between 2002 and 2003, several groups simultaneously discovered a significant advance in OCT imaging termed “spectral” or Fourier” domain OCT. The new technology allowed increased imaging speeds of 25-100 times that of previous OCT instruments, enabling much higher pixel density, improving image quality, and greater retinal coverage among some of the advantages.

One of the first prototype spectral domain OCT devices was developed at MIT and implemented at NEEC in 2004. By 2006, a new wave of commercially available SD-OCT instruments had exploded into the market, and these instruments are currently the standard in OCT technology. 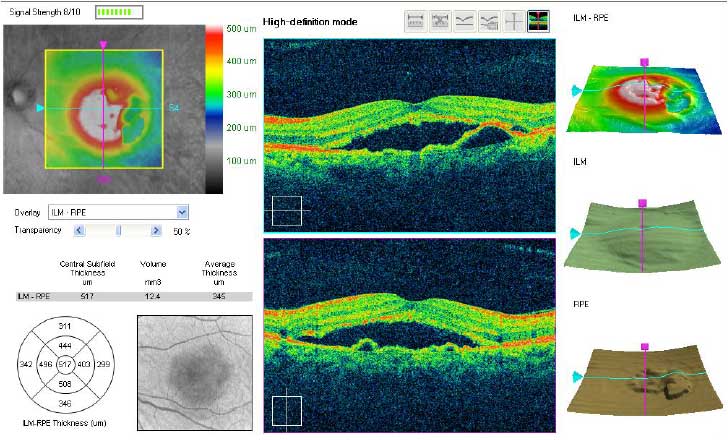 An alternative Fourier-domain detection system is called swept-source OCT (SS-OCT). SS-OCT uses a “tunable” laser and a high-speed camera to increase imaging speeds 4-20 times that of SD-OCT devices, as well as to increase OCT signal.

It also uses a longer wavelength light source, which allows better light penetration into tissue, allowing for better visualization of tissues deep to the retina (the choroid and sclera). This technology is still investigational, and a prototype SS-OCT device is currently available for imaging patients in the eye clinic at NEEC.

OCT angiography (OCTA) is an investigational technique that uses motion contrast to image the retinal blood vessels. By comparing repeated OCT scans from a retinal location, changes in signal due to blood cell movement can be used to create blood vessel maps (OCT angiograms).

Unlike fluorescein angiography, which uses intravenous dye and has long been the standard technique to image retinal blood vessels, OCTA is non-invasive – it does not require an intravenous dye.

This technology is also investigational and is currently being employed at NEEC, using both the prototype SS-OCT instrument as well as a commercially available SD-OCT device (Optovue, Inc). 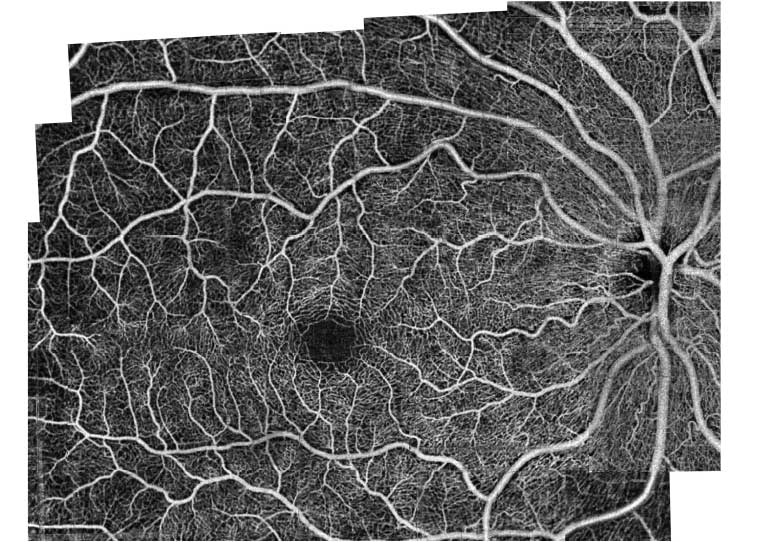 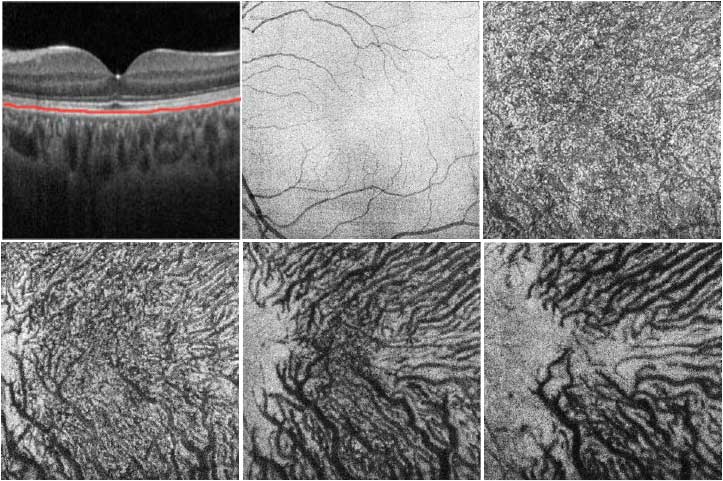 Here is an example of various en-face OCT scans through various layers of the choroidal vasculature in a normal eye, taken with a prototype SS-OCT device at NEEC.